A screenshot of intestinal detachment from a five year old child.

A screenshot of intestinal detachment from a five year old child.

Scrolling through my newsfeed I was confronted with this screenshot. 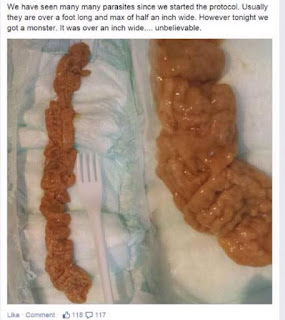 It’s from a social media group full of parents and carers who believe they can ‘heal’ Autism by giving their children Chlorine Dioxide, a water purification agent used to sanitise swimming pools, Jacuzzis and spas. I was once told I could not take my daughter into a hot tub as the Chlorine levels were too high, it’s not something to intentionally take internally!
There are however parents who have been misinformed that it will kill the intestinal rope worms that are causing their child’s Autism. These rope worms apparently breed at a fast rate particularly when it’s a full moon.
There’s no medical acknowledgement to rope worms anywhere in history and the full moon link with Autism is also scientifically unproven.
The screen shot in question has been posted and commented upon by parents tagging each other in amazement offering congratulations to the poster for capturing this fearsome creature.
A fellow anti MMS campaigner who has had Colon problems in the past had this image up on her computer screen when her fiancée walked past and saw it. He enquired as to whether she was investigating another medical procedure as he was able to see from his experience that what was on the screen strongly resembles intestinal lining.
Daniel Inderwisch has worked as a slaughter man for over twenty years and during that time has slaughtered pigs whose inner anatomy is very similar to humans.
His duties not only include the slaughter of the animal but the gutting so he’s well used to seeing the inner organs of pigs including the heart, lungs and intestines.
In Daniels opinion the screenshot in question is intestinal and as the father of a child with Autism he is sickened it came from a human and he cannot fathom how anyone can promote such cruelty.
The intestinal lining pictured is from a five year old child whose mother is practicing Andreas Kacklers Parasite Protocol.
The poster commented that she had cried most of the night tossing and turning in the knowledge this “thing” had been living inside her child.
It’s been part of her child since in utero and she has repeatedly flushed his immature system with a bleaching agent until it has given way, detached from the intestinal wall and seeped out through her child’s anus as a result of enema’s!
at 1.8.15